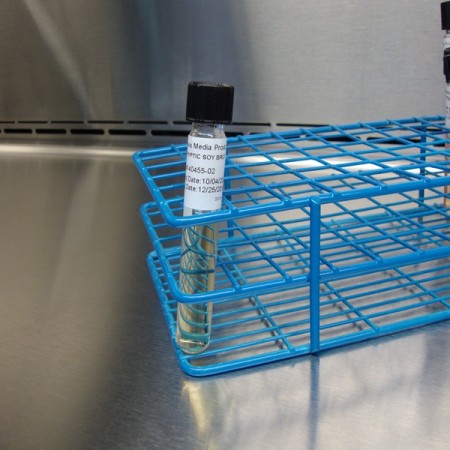 A highly nutritious versatile medium which is recommended for general laboratory use. Due to the inclusion of both Tryptone and Soy Peptone, the medium will support a luxuriant growth of many fastidious organisms without the addition of serum, etc. Tryptic Soy Broth (TSB) conforms to formulations detailed in various international pharmacopoeias1,4,5,6 .   Casein peptone and Soy peptone provide nitrogen, vitamins and minerals. The natural sugars from Soy peptone and Glucose promote organism growth. Sodium chloride is for the osmotic balance, while dipotassium hydrogen phosphate is a buffering agent. Tryptic Soy Broth is often for the tube dilution method of antibiotic susceptibility testing. The addition of a small amount of agar (approx. 0.05-0.2%, add before sterilization) renders the broth suitable for the cultivation of obligatory anaerobes, such as Clostridium species. The superior growth-promoting properties of Tryptic Soy Broth make it especially useful for the isolation of organisms from blood or other body fluids. Anticoagulants such as sodium polyanetholesulfonate or sodium citrate may be added to the broth prior to sterilisation. 5 to 10 ml of blood may be added to 50 ml of medium.  Trypticase Soy Broth conforms with specifications of The United States Pharmacopeia (USP). Trypticase Soy Broth (Soybean-Casein Digest Medium) is a general-purpose medium used in qualitative procedures for the Trypticase Soy Broth is a nutritious medium that will support the growth of a wide variety of microorganisms, including common aerobic, facultative and anaerobic bacteria and fungi.1-4 Because of its capacity for growth promotion, this formulation is included in the USP as a sterility test medium.5 L007517 1 of 4cultivation of fastidious and nonfastidious microorganisms from a variety of clinical and nonclinical specimens. TSB is also recommended, because of growth promotion, for use as the inoculum broth for disc diffusion and agar-dilution Enzymatic digests of casein and soybean meal provide amino acids and other complex nitrogenous substances. Dextrose is an energy source. Sodium chloride maintains the osmotic equilibrium. Dibasic potassium phosphate acts as a buffer to control pH.antimicrobial susceptibility testing as standardized by the Clinical and Laboratory Standards Institute (formerly NCCLS).6,7Trypticase Soy Broth was used as a control in the evaluation of bile as a culture medium for the isolation of Salmonella from blood cultures. Sixty-eight percent (68%) of the Trypticase Soy Broth cultures were positive for Salmonella.15 In another study, growth patterns of Staphylococcus aureus, Escherichia coli, Listeria monocytogenes, group B β-hemolytic Streptococcus (GBS), Klebsiella pneumoniae and Staphylococcus epidermidis were compared using cerebrospinal fluid (CSF), Trypticase Soy Broth, and a phosphate buffer. S. aureus, GBS, L. monocytogenes, K. pneumoniae and S. epidermidis grew within 24 h in TSB; the growth of these bacteria in CSF and phosphate buffer remained within one log of the starting point with the exception of GBS and S. epidermidis whose growth continued to decline. All three fluids supported the growth of E. coli to varying degrees for 16  to 24 hours.

4. Fredette, V., and A. Forget. 1961. The sensitivity of several media to small inocula. Extract from a paper presented at the Canadian Society of Microbiology Annual Meeting, June 12-15. Kingston, Ontario.

Be the first to review “Tryptic Soy Broth” Cancel reply