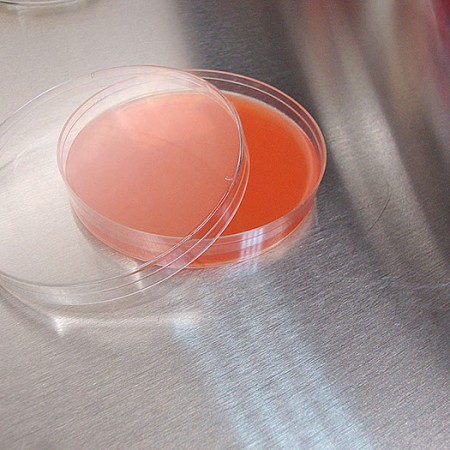 MYP Agar Base with added supplements is used for the isolation and identification of the Bacillus species and pathogenic Staphylococci.

The medium contains the peptic digest of animal tissue and meat extract which supply nitrogen. Mannitol fermentation can be detected with phenol red, which results in a yellow colour being present in the mannitol fermenting colonies. Egg Yolk Emulsion helps in the differentiation of lecithinase producing colonies, which are surrounded by a zone of white precipitate. The addition of polymyxin B supplement helps to restrict growth of gram negative bacteria.

Bacillus cereus has been recognized as a causative agent of food poisonings since the 1950s. Many early isolation techniques used blood agar, relying on hemolysis and colony morphology for the detection of suspect Bacillus cereus, and then a range of tests for confirmation. The main problem with these media was that they were not selective and were generally only useful in detecting high numbers of Bacillus cereus.

Bacillus cereus is a Gram-positive, rod shaped, facultative aerobic spore-forming organism. The cells are large (3.5mm) and sometimes form short chains or long strings with central to terminal ellipsoidal spores that do not distend the cell. Unstained globules within the cells occur when they are grown on glucose containing media.  Although the presence of Bacillus cereus has been determined in foods related to outbreaks of illness since the early years of the 20th century1, its role as a causative agent in food poisoning was not established until the 1950s. Two distinct syndromes, emetic and diarrheal, may occur in Bacillus cereus associated food borne illnesses, related to two different metabolites. The diarrheal type of illness is caused by a heat labile, high molecular weight protein, while the vomiting (emetic) type is caused by a heat stable, low molecular weight peptide2.  A wide range of foods have been associated with the diarrheal syndrome, including meat based dishes, soups, vegetables, puddings and sauces2. The emetic syndrome seems to be associated to a more limited range of foods with approximately 95% of all cases related to fried or cooked rice3. Foods implicated in Bacillus cereus induced illnesses usually contain at least 105 cfu/g, although about 10% of outbreaks have been associated with food containing less than this2. In almost all cases the implicated food has been held for too long at unsatisfactory storage temperatures. MYP Agar is a selective and differential medium developed by Mossel et al 4. The diagnostic features of the medium rely upon the failure of Bacillus cereus to utilize mannitol and the ability of most strains to produce phospholipase C. The medium is made selective by the addition of polymyxin B which will inhibit Gram-negative bacteria. MYP Agar has proved to be very effective for detecting B. cereus even for ratios as challenging as one cell of Bacillus cereus to 106 cells of other organisms4.

Be the first to review “MYP Agar” Cancel reply