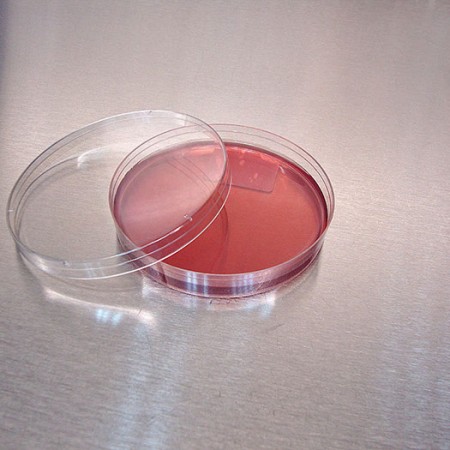 MacConkey Agar is based on the bile salt-neutral red-lactose agar of MacConkey.3 the original MacConkey medium was used to differentiate strains of Salmonella typhosa from members of the coliform group. Formula modifications improved growth of Shigella and Salmonella strains. These modifications include the addition of 0.5% sodium chloride, decreased agar content, altered bile salts, and neutral red concentrations. The formula modifications improved differential reactions between enteric pathogens and coliforms. MacConkey Agar is recommended for the detection and isolation of Gram-negative organisms from clinical,4 dairy,5 food,6,7 water,8 pharmaceutical,1,2 and industrial9 sources.

Peptone is the nitrogen and vitamin sources in MacConkey Agar. Lactose is the fermentable carbohydrate. During Lactose fermentation a local pH drop around the colony causes a color change in the pH indicator, Neutral Red, and bile precipitation. Bile Salts Mixture and Crystal Violet are the selective agents, inhibiting Gram-positive cocci and allowing Gram-negative organisms to grow. Sodium Chloride maintains the osmotic environment. Agar is the solidifying agent.  A differential medium for the detection, isolation and enumeration of coliforms and intestinal pathogens in water, dairy products and biological specimens. MacConkey Agar corresponds to the medium recommended by the World Health Organization1, the Dept. of Health2 and by Windle Taylor3 for the bacteriological examination of water.

Pathological specimens.  Due to its ability to support the growth of pathogenic Gram-positive cocci (e.g. staphylococci and enterococci) as well as Enterobacteriaceae, MacConkey Agar is particularly recommended for the cultivation of pathogens which may be present in a variety of specimens such as urine, faeces and wound swabs. Whilst it is selective it does not suppress a mixed bacterial flora to the same extent as other inhibitory media (including other MacConkey agars). It provides a number of other diagnostic indications in addition to bile tolerance, such as colony morphology and chromogenesis. MacConkey Agar should be used in parallel with other selective indicator media such as Desoxycholate Citrate Agar, Bismuth Sulphite Agar, Brilliant Green Agar and Brilliant Green Bile (2%) Broth, and a non-selective medium such as Blood Agar.Water Examination2,3 The medium may be used for the direct count of coli-aerogenes bacteria, using pour-plates prepared from known volumes of the water sample, but a more exact role for the medium is for the differentiation of organisms producing acid and gas in MacConkey Broth at 35°C: all positive broth tubes are plated on MacConkey Agar, the plates are incubated for 24 hours at 35°C and examined for typical colonies (see below). Colonies composed of Gram-negative non-sporing rods are subcultured for further identification.

Be the first to review “MacConkey Agar” Cancel reply