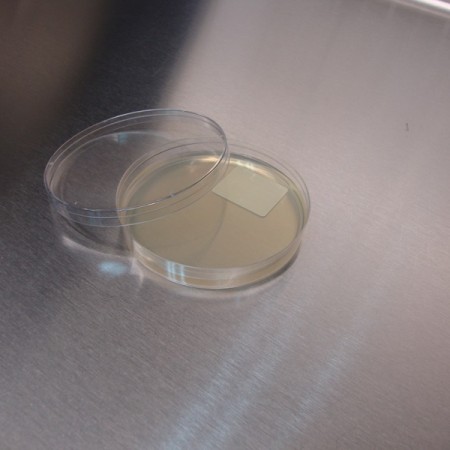 A medium used for the cultivation and isolation of Brucella, including fastidious types.

Brucella medium with antibiotics has advantages over the media described by Kuzdas and Morse2 and Renoux3 in that it will support growth of fastidious types and it is more effective as a selective medium. During investigations, Jones and Brinley Morgan showed that serum-glucose agar with antibiotics gave excellent growth of all Brucella strains and permitted better growth of Brucella abortus biotype 2 – a strain which had been difficult or impossible to cultivate.  The addition of dyes (i.e. malachite green and gentian violet) as selective agents, is not recommended, as it may result in poor growth of many Brucella strains. Where a non-selective medium is required, the medium may be employed with the addition of serum only (i.e. without antibiotics): for subsequent differentiation between strains of Brucella. Farrell’s Media is recommended for use in conjunction with the Cruickshank dyestrip method4:  However, there are exceptions to the above and it is therefore advisable to base identification on many characteristics5.  The slow growth of Brucella species, combined with their requirement for highly nutritious media means that selective agents must be incorporated to prevent overgrowth of contaminant organisms from milk or veterinary tissues.   Media containing bacteriostatic dyes are inhibitory to strains of Brucella abortus biotype 2 and other fastidious strains. Antibiotics used in place of dyes enabled growth of all biotypes Brucella species to appear on selective media1. However, Leech et al.6 showed that the serum-glucose-antibiotic formulation1 was not sufficiently selective and was less efficient than guinea-pig inoculation.   Barrow and Peel7 modified a selective medium devised by Mair8. This contained both antibiotics and gentian violet. Failure of some strains of Brucella abortus to grow confirmed their sensitivity to very low concentrations of the dye recognised by Mair.  Farrell9 developed a highly selective antibiotic-containing nutrient medium which incorporated bacitracin 25iu/ml, vancomycin 20mg/ml, cycloheximide 100mg/ml and nystatin 100iu/ml, in a serum-glucose agar base. In comparative trials10 the medium was shown to give a rate of isolation equivalent to that achieved by guinea-pig inoculation. It also supported the growth of Brucella abortus biotype 2 strains. Brucella Selective Supplement SR0083 is based on the superior formulation of Farrell. Its greater efficiency at suppressing bacterial contamination than either serum glucose agar or Barrow and Peel’s Medium was shown in a further trial11.