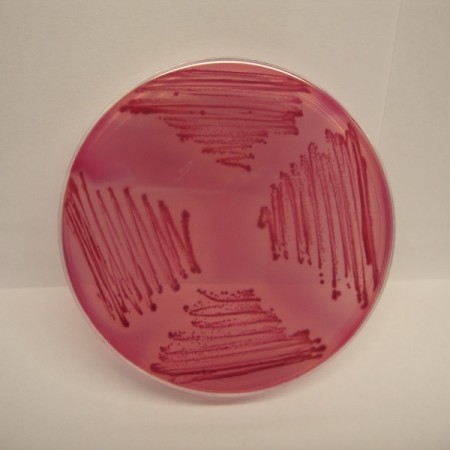 Endo Agar is a differential and slightly selective culture medium for the detection of coliform and other enteric microorganisms.

The majority of the enteric plating media developed in the early years of the 20 century utilized either mixtures of bile salts or individual salts as selective agents to achieve inhibition of gram-positive species. In 1904, Endo reported the development of a culture medium for the differentiation of lactose fermenters from the nonfermenters in which no bile salts were used. Inhibition of gram-positive microorganisms was achieved by the sodium sulfite and basic fuchsine contained in the formulation. Endo’s Fuchsine Sulphite Infusion Agar was the original name for this medium, which is known today as Endo Agar. It was developed initially in order to facilitate the isolation and identification of the typhoid bacillus. The original formula has been modified extensively since its introduction. The meat infusions have been replaced by a peptic digest of animal tissue. The dye composition and concentration also have been adjusted. Over the years, Endo Agar has been an important medium in the microbiological examination of potable water and wastewater, dairy products and foods; however, the current compendia of standard methods for the examination of these materials recommend alternative media formulations.

The selectivity of Endo Agar is due to the sodium sulfite/basic fuchsine combination, which results in the suppression of gram-positive microorganisms. It is classified as only slightly selective since other media contain more potent inhibitors of the gram-positive microorganisms. Coliforms ferment the lactose, produce pink to rose-red colonies and similar coloration of the medium. The colonies of organisms that do not ferment lactose are colorless to faint against the pink background of the medium.

2. Levin and Schoenlein. 1930. A compilation of culture media for the cultivation of microorganisms.

Be the first to review “Endo Agar” Cancel reply