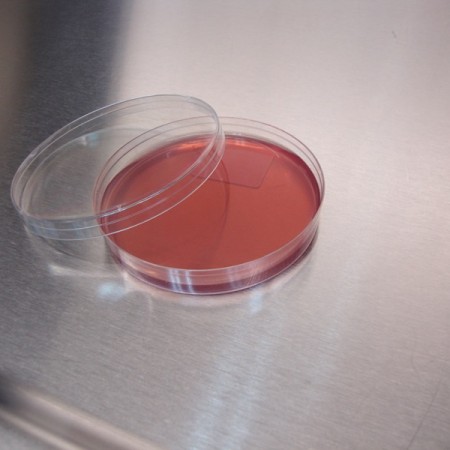 A selective medium used in qualitative procedures for the isolation of Yersinia enterocolitica from a variety of clinical and nonclinical specimens.

Enzymatic digest of gelatin, enzymatic digest of casein, and enzymatic digest of animal tissue provide the nitrogen and amino acids in Yersinia Selective Agar. Yeast extract is the vitamin source in this formula. Selectivity of Yersinia Selective Agar is due to the presence of sodium deoxycholate, sodium cholate, crystal violet, and Irgasan® that markedly inhibit growth of Gram-positive and many Gram-negative organisms. Supplementation with cefsulodin and novobiocin improves inhibition of normal enteric organisms. Differentiation is based on mannitol fermentation. Organisms capable of fermenting mannitol lower the pH around the colony, allowing absorption of neutral red and turning the colony a red color. Due to the localized pH decrease, a zone of precipitated bile may also be present. Organisms that do not metabolize mannitol to acid end products will form colorless, translucent colonies. Sodium chloride maintains the osmotic balance of the medium. Sodium pyruvate and magnesium sulfate stimulate organism growth. Agar is the solidifying agent.

4. Schiemann, D. A. 1980. Yersinia enterocolitica: Observations on some growth characteristics and response to selective agents. Can. J. Microbiol. 26:1232-1240.

5. Devenish, J. A., and D. A. Schiemann. 1981. An abbreviated scheme for identification of Yersinia enterocolitica isolated from food enrichments on CIN (cefsulodin-irgasan-novobiocin) agar. Can. J. Microbiol. 27:937-941.

6. Schiemann, D. A. 1982. Development of a two-step enrichment procedure for recovery of Yersinia enterocolitica from food. Appl. Environ. Microbiol. 43:14-27.

Be the first to review “CIN Agar” Cancel reply