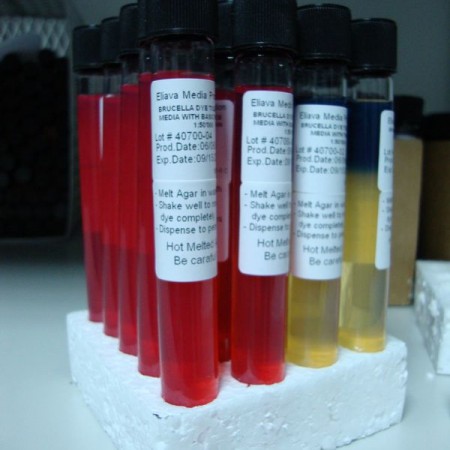 Dye Tolerance Media is recommended for use in the specification of Brucella spp.

Brucellosis is a zoonosis of worldwide importance, particularly in developing countries. The organism is highly endemic in the Mediterranean Basin, Middle East, Western Asia, Africa and Latin America. The incidence of brucellosis in industrialized countries has decreased significantly due to aggressive programs to eradicate infected bovines. Historically, brucellosis has been primarily associated with occupational exposure for farmers, butchers, veterinarians and laboratory workers. Recent infections have been associated with the ingestion of unpasteurized goat milk. Infection results from direct contact of abraded skin or mucosal surfaces, consumption of contaminated food products or inhalation. Aerosols are highly infectious requiring only 10-100 organisms. The incubation period ranges from five days to two months.

The genus Brucella consists of small, non-motile gram-negative coccobacilli or short rods that are pathogenic for humans and animals. Colonies on blood agar are usually 0.5 to 1mm in diameter. The organisms are arranged singly and less frequently in pairs, short chains or small groups. Bi-polar staining is usually not observed. The organisms are non motile and do not possess flagella. Brucella species are catalase positive and most strains are oxidase positive. Enhanced CO2 may be required for some strains especially on primary isolation. Historically there have been six recognized species: melitensis, abortus, suis, canis, ovis and neotomae. Three of the species contain multiple biovars: Brucella melitensis (3), Brucella abortus (7), and Brucella suis (5).

Four species can cause brucellosis in humans: Brucella melitensis, Brucella abortus, Brucella suis and Brucella canis (rare). The severity and duration of brucellosis depends partially on the species of Brucella involved. Brucella melitensis is the most serious and debilitating infection. Brucella suis is highly invasive and tends to localize causing suppuration and necrosis. Brucella abortus is less invasive and the disease and tissue damage caused is less severe. Brucella canis causes mild to localized infection and complications are rare. Brucella speciation and biovars are defined by host specificity, tolerance to the dyes fuchsin and thionin, CO2 requirement, rate of urease activity, agglutination in monospecific adsorbed rabbit antisera and susceptibility to Brucella Tbilisi phage.

In 1954, Brucella suis became the first agent weaponized by the United States in its offensive biological warfare program. Brucella is currently listed as a Category B agent that can be used for biowarfare, bioterrorism or biocriminal activities. As part of the Laboratory Response Network, Level B laboratories are responsible for the definitive identification of Brucella species.