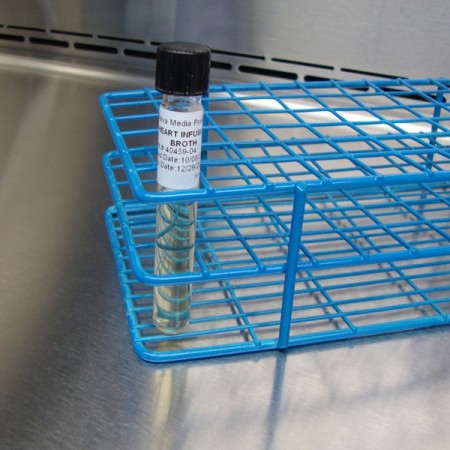 Brain Heart Infusion Broth (BHI) is a general-purpose liquid medium used in the cultivation of fastidious and nonfastidious microorganisms, including aerobic and anaerobic bacteria, from a variety of clinical and nonclinical materials.

Rosenow described brain-heart infusion broth prepared by adding pieces of brain tissue to meat infusion or beef extractdextrose broth. A variation of this medium appeared for many years in the National Formulary.

The current formulation is similar to the NF Brain Heart Infusion Broth, but the brain infusion component is composed of solids resulting from the drying of the liquid material and the heart infusion component has been replaced with a peptone of partially digested animal tissue. BHI broth is used for the cultivation of a wide variety of microorganisms, including bacteria, yeasts and molds. BHI broth, 0.5 mL per tube, is used for the cultivation of bacteria employed in the preparation of inocula for microdilution minimal inhibitory concentration (MIC) and identification (ID) test panels. When a large number of cells are inoculated into the small volume of broth, a bacterial culture rapidly reaches its stationary phase of growth. The medium is also used in 5-mL amounts per tube for the preparation of inocula in antimicrobial susceptibility test procedures. This volume and the 8-mL tubes also can be used for general purposes. Fildes enrichment may be incorporated for the growth of fastidious organisms. With the addition of 0.1% agar, the medium is used for the cultivation of anaerobes. The medium pre-reduced in Hungate tubes is recommended for the cultivation of anaerobic microorganisms, particularly obligate anaerobes.

The broth medium that contains 6.5% sodium chloride is used to differentiate the enterococci from nonenterococcal group D streptococci by the 6.5% salt tolerance test. Brain Heart Infusion without Dextrose is a basal medium used with carbohydrates for fermentation studies. Brain Heart Infusion, Modified differs from other formulations by the quantities of the ingredients and the substitution of pancreatic digest of casein for pancreatic digest of gelatin.

BHI Broth is a nutritious, buffered culture medium that contains infusions of brain and heart tissue and peptones to supply protein and other nutrients necessary to support the growth of fastidious and nonfastidious microorganisms. In the formulation containing 6.5% sodium chloride, the salt acts as a differential and/or selective agent by interfering with membrane permeability and osmotic and electrokinetic equilibria in salt-intolerant organisms. Fildes enrichment (peptic digest of sheep blood) is incorporated into one tubed formulation for the cultivation of fastidious microorganisms, such as Haemophilus influenzae. The addition of 0.1% agar aids in the cultivation of anaerobic microorganisms because its consistency yields conditions of reduced oxygen tension. The pre-reduced medium in Hungate tubes is based on Hungate methods of culturing anaerobic microorganisms outside of an anaerobic chamber. a self-contained, anaerobic tube sealed using a Hungate screw cap. The cap contains a butyl rubber septum stopper that permits inoculation and incubation without exposing the medium to air.