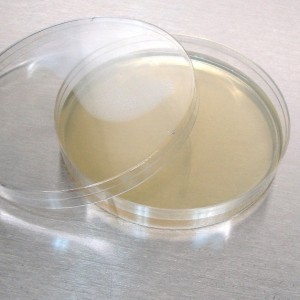 Brain Heart Infusion Agar (BHIA) is a general-purpose medium suitable for the cultivation of a wide variety of organism types, including bacteria, yeasts and molds.

In the early years of bacteriology, meat infusions were utilized as the growth-supporting components in a large number of culture media. Although they were cumbersome to prepare, lacked consistency from batch to batch and were undefined as to their nutritive content, they enabled the cultivation of microorganisms in both solid and liquid media. As the state of the art in enzymology and chemistry advanced, methods were developed for the preparation of peptones that were the result of enzymatic or acid hydrolysis of animal tissues or products and vegetable substances. These peptones currently are the major nutritional additives to culture media formulations, but infusions are still utilized in specific media.

BHI Agar is one formulation in which meat infusion is used, although, unlike in the earlier days, the infusion components are solids resulting from the drying of the liquid infusion material rather than the liquid components themselves. Peptones are also included as sources of nutrients.

BHI Agar has proven to be effective in the cultivation of a wide variety of microorganisms, including many types of pathogens. BHI Agar can be used as a general medium for aerobic bacteriology and for the primary recovery of fungi from clinical specimens.

Brain Heart Infusion Agar with 10% Sheep Blood can be used to isolate systemic fungi that may grow poorly on the no enriched medium. Antimicrobial agents, including chloramphenicol, gentamicin, and penicillin in combination with streptomycin, can be incorporated to improve the recovery of pathogenic fungi from specimens heavily contaminated with bacteria (see Selective Brain Heart Infusion Agars).

BHI Agar derives its nutrients from the brain heart infusion, peptone and dextrose components. The peptones and infusion are sources of organic nitrogen, carbon, sulfur, vitamins and trace substances. Dextrose is a carbohydrate source that microorganisms utilize by fermentative action. The medium is buffered through the use of disodium phosphate.

When defibrinated sheep blood is added to the basal medium, it provides essential growth factors for the more fastidious fungal organisms.